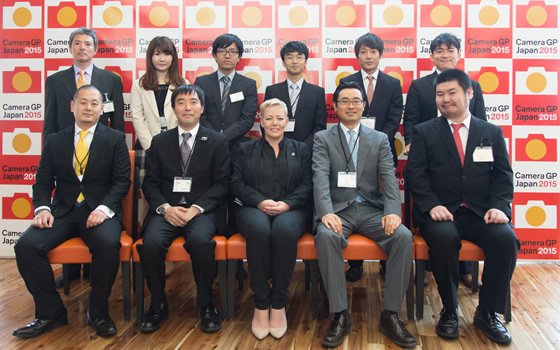 The winners of the Camera Grand Prix 2015, hosted by the Camera Journal Press Club of Japan (CJPC), received their awards in Tokyo on Monday, 1 June 2015. Louise Donald, Treasurer of TIPA, attended the awards ceremony.

There were four award categories in the Camera Grand Prix 2015. The “Camera of the Year” and “Lens of the Year” awards were selected by a total of 53 individuals who voted for the best products introduced to the Japanese market between 1 March 2014 and 31 March 2015. The “Readers’ Award” was established in 2008, in celebration of the 25th anniversary of the Camera Grand Prix and is selected by magazine readers. The “Editors’ Award” winners were selected by CJPC members from among all the cameras and photography-related products and equipment introduced in the Japanese market during the past year.

The winning products for the Camera GP 2015 are:

The Canon EOS 7D Mark II has a number of high-level features such as 65-point all-cross-type AF sensors, 10 fps high speed continuous shooting, which are in the EOS-1D X, the Canon’s flagship model. The camera scored highly as it allows users comfortable shooting for both moving and still objects. Additionally, the camera’s flicker-free shooting function, which gives stable exposure under a fluorescent light or mercury lamp, is another innovation. The camera shows the potential of an APS-C sensor-sized DSLR, offering the advantage of an APS-C format with telephoto zoom lenses and continuous shooting functions.