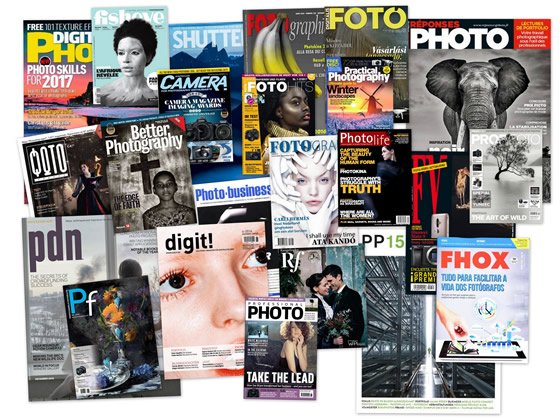 In its ongoing efforts to serve both its member magazines and the industry at large, the Technical Image Press Association (TIPA: www.tipa.com) has revealed the results of its 2017 Readership Survey. Conducted by the independent and highly respected Research Institute for Press Research and Media Advice (Wissenschaftliches Institut für Presseforschung und Medienberatung: https://presseforschung.de/), the survey was published in member magazines and posted on the web, with readers responding by mail and online.

*Recognition of TIPA Logo: Recognition and Buying Influence
Fully 60% of respondents recognized that the TIPA Award logo on a product designated high quality photo cameras and imaging products and that test seals and awards provide helpful guidance in their purchasing decisions. Furthermore, 60% of respondents replied that when deciding between competitive products, a TIPA Award would strongly or favourably influence their decision.

*Sources of Information About Photographic Products
Readers rely on TIPA member magazines for in-depth information about photographic products with over 90% indicating them as an important source. Internet sites, including those of member publications, have a near equal but slightly lesser influence. Other sources include specialty retailers, trade fairs and company brochures. It is important to note that readers rated photographic magazines as their most trusted source with nearly double the influence of any other option in the survey.

*Interest In and Engagement With Photo Magazines
Respondents indicated a strong involvement with editorial, supplements and advertisements in member magazines. 83% said they read all or most of each issue and that they refer back to it frequently on an average of 5 times; the “pass-along” rate is 2.3 people per copy. A majority perceives the magazines as “important” and “competent”, with nearly 85% indicating that if the magazine should cease publication they would miss it. Among favourite topics covered in the magazines were detailed camera tests, tips and techniques, profiles of photographers and their work, and discussions of photo art and history. Interestingly, readers like their photo magazines in print, with only 13% responding that they use an e-version regularly.

*Intention to Buy
Given the strong influence of the magazines and the TIPA Award on buying decisions, the survey queried respondents on their “intentions to buy” within the next 24 months. Over 40% indicated a digital SLR was on their wish list; almost 50% are in the market for photo accessories; and topping the list were interchangeable lenses, which garnered an impressive 65% response. Other strong segments included photo/graphics software, studio lighting, and tripods. An item of note is the influence of advertising in the publications with 77% of respondents reporting that they “always” or “often” read them. In addition, 60% of readers indicated that advertisements have informational value and have prompted them to investigate the product further or to make a purchase.

*Reader Profiles
TIPA member magazines serve a diverse range of photographers and the photo industry, from amateur to enthusiast to pro, as well as trade magazines that cover industry news and events. On the pro side, 20% indicated photography as their main profession, while over 40% of enthusiasts said that photography was their favourite activity. Overall, readers own an average of 2.2 cameras, and over 25% indicated that they “never go out without their camera” and that they are considered the photo mentor within their social circle.

TIPA has been conducting Readership Surveys since 2005 as a service to member magazines, their publishers and the photo industry at large. Said TIPA Chairman Thomas Gerwers, “It is essential that TIPA’s members understand and appreciate the passion with which their readers are engaged in their magazines as well as their interests, activities and buying intentions. In addition, the TIPA Survey can serve as a mirror held up to the photo community at large, a very important matter in terms of the challenges it faces and the opportunities ahead. As an association of photo magazines, we feel strongly that photo-centric publications play an important role in the revitalisation and growth of our industry and that the loyalty readers feel and the trust they place in our member magazines are an important asset for all.”

The results can be downloaded from the TIPA website at http://www.tipa.com/english/readers_survey.html .