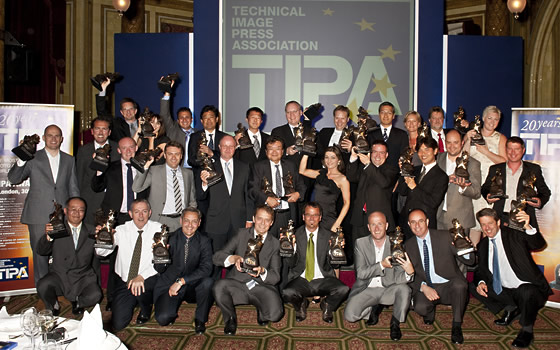 The Technical Image Press Association (TIPA) successfully celebrated the XXI edition of the TIPA Awards Ceremony on 30 June in The Royal Horseguardﾒs Hotel, London. Over 70 people from 22 winning companies were welcomed by the TIPA Board of directors and the members that also attended the ceremony. Since the beginning of the TIPA adventure, this event has proved to be a great, almost unique, opportunity for managers from different companies from the imaging sector to meet and discuss in a very friendly and relaxed way.

The TIPA Awards are considered to be the most coveted photo and imaging awards in the industry. This year, the TIPA Awards were voted on by the editors of the member magazines at the association’s last General Assembly held in April in Istanbul. In London, the bronze TIPA trophies were finally presented to representatives of the winning companies.

Mr. Thomas Gerwers, the Chairman of TIPA, explained that the last General Assembly had been a very special meeting because it was the first with members from Asia and it marked the XX anniversary of the association. It is not a mistake, however, that TIPA celebrated the XXI edition of the Awards ceremony, as the first one took place in Paris in 1991, or the association’s year zero.

"As a matter of fact most of the products come from a country which suffered and still is suffering from the effects of the so called March catastrophe", Mr. Gerwers said.

"Japan is, as all of us are aware, a very important country for the photographic industry worldwide. The terrible effects of the earthquake and the tsunami earlier this year immediately led the board of TIPA to decide to donate 10.000 Euros to the Japanese Red Cross to help victims of the disaster. We really hope that this, together with many other donations from Japan and all over the world, will help Japan to recover soon."

Following the recent globalisation strategy, TIPA counts member magazines from Australia, Canada, China, South Africa and the USA. Keen to have a representative from Japan, and considering that the country has a similar association of 11 magazines, TIPA proposed an affiliation to the Camera Journal Press Club of Japan (CJPC), which was enthusiastically accepted. In Istanbul, CJPC officially became an affiliate member of TIPA and took part in voting for the TIPA Awards 2011. TIPA also took part in the awarding of the prestigious Camera Grand Prix in Japan, represented by its Chairman. Today, TIPA and the CJPC together comprise an association of 40 member magazines; the world’s largest ever.