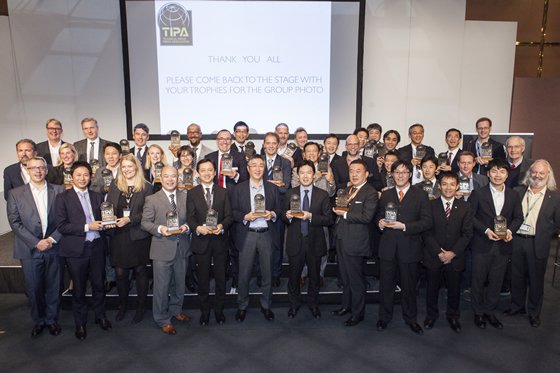 The TIPA World Awards Presentation Ceremony took place at photokina on the evening of 26 September and was well attended by representatives from the award winning companies, officials from photokina, and editors and publishers from among the 30 TIPA member publications.

The TIPA World Awards Presentation Ceremony took place at photokina on the evening of 26 September and was well attended by representatives from the award winning companies, officials from photokina, and editors and publishers from among the 30 TIPA member publications.

The gala event featured presentations of the prestigious TIPA World Award trophy to each of the winners in 40 different product categories that span the photo and imaging industry. The following morning, a TIPA breakfast meeting attended by media and technical representatives from numerous camera companies gave an in-depth look at the testing protocols of TIPA’s associated testing lab, Image Engineering.

TIPA and photokina
The partnership between TIPA, the worldwide association of imaging magazines and online publications and photokina has been strong throughout the years.

As part of the award ceremony, photokina COO Katharina C. Hamma spoke to the on-going and strong relationship between TIPA and photokina and how the award presentation event is one of the highlights of the show, and will continue to be so into the future. She also made special note of the achievements of TIPA Chairman, Thomas Gerwers and his twenty-year association with TIPA, the past ten as Chairman, and how, under his leadership, TIPA has expanded to a worldwide organization with 30 member publications from five continents. She also paid tribute to the achievements of imaging companies from around the world in winning the coveted TIPA World Award.

Said Thomas Gerwers, Chairman of TIPA and master of ceremonies at the event, “The TIPA World Award process draws upon the global panel of knowledgeable experts who are exposed to a wide range of products. Through their publications’ reach and editorial content they serve a large readership that has come to count on them for an honest and trustworthy appraisal of photo and imaging products. We are very pleased to play our part in recognizing the exciting products and technology offered by our industry.”

Beginning two years ago, TIPA’s Technical Committee began an extensive search for an independent testing lab that could provide all the tools and tests required for this work and established a close working relationship with Image Engineering that laid the groundwork for protocols and reports that would best serve the industry and photographers. The technical briefing at TIPA’s breakfast meeting served to introduce these rigorous testing procedures and gain valuable feedback from company representatives. Uwe Artmann, CTO of Image Engineering, gave a fascinating presentation to the gathered press and company representatives on the thorough testing procedures used by the lab.

Image Engineering’s uniqueness is their ability to provide a complete system, from the execution of standardized tests and the development of their own test software tools to the production and worldwide marketing of high quality measuring devices and charts, all of which come into play in the evaluations supplied to TIPA member publications.