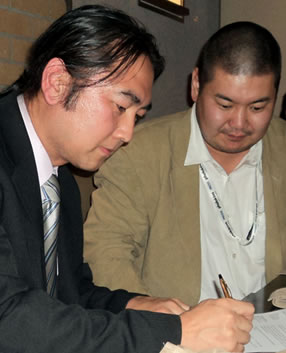 Cologne, 25 September 2010 ﾖ Two years ago TIPA decided to adopt a globalization strategy by inviting magazines from outside of Europe to join TIPA. This was a very successful strategy with members joining from Australia, Canada, China, South Africa and the USA. Only the important market of Japan, where the Camera Journal Press Club of Japan (C. J. P. C/Japan) represents 11 camera and photography magazines, was still missing.

During ﾑPhotokinaﾒ representatives of the C. J. P. C/Japan and TIPA met to discuss possible cooperative activities. As a result of the discussions the two associations signed a ﾑletter of intentﾒ outlining future cooperation based on and considering the different culture and market structure in Japan.

Mr. Thomas Gerwers, the Chairman of TIPA, said,
ﾓWe are very happy that our two associations can now work together to promote TIPA.ﾔ

Mr. Makoto Shibata, the Chairman of the C. J. P. C/Japan, said,
ﾓWe agree on future cooperation and are pleased that we will have closer contact between the two organisations.ﾔ