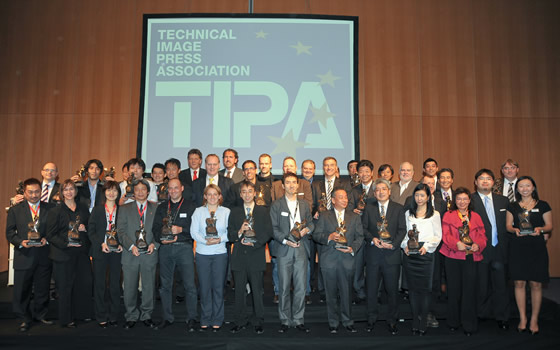 Cologne, 21 September 2010 - The Technical Image Press Association (TIPA) celebrated a successful TIPA Awards ceremony on the opening day of photokina in Cologne, Germany in an event sponsored by Koelnmesse. A large audience was present to watch the handing over of the bronze TIPA Awards trophies to representatives of the 28 winning companies. The TIPA Awards 2010 were voted on by the editors of the member magazines at the association's last General Assembly held in April in New York. The TIPA Awards are considered to be the most coveted photo and imaging awards in the industry.

Mr. Thomas Gerwers, the Chairman of TIPA, introduced two new members of TIPA; these were the magazines ﾑChinese Photographyﾒ from China and ﾑCameraﾒ from Australia. With these new members TIPA is now present on five continents. Also attending the ceremony was Mr. Makoto Shibata, the Chairman of the Japanese Camera Journal Press Club, who is in Cologne to discuss possible cooperation between the two organisations. Mr Gerwers expressed his hope that the whole industry and the media community would share the Compact System Camera name and its shortcut CSC for small format cameras with interchangeable lenses. Already some companies are starting to use this name in their technical information.

Mr. Oliver P. Kuhrt, Director of the Cologne Trade Fair, said there was a lot to celebrate at this 20-40-60 event: the 20th annual TIPA awards, forty winning products and 60 years of photokina.