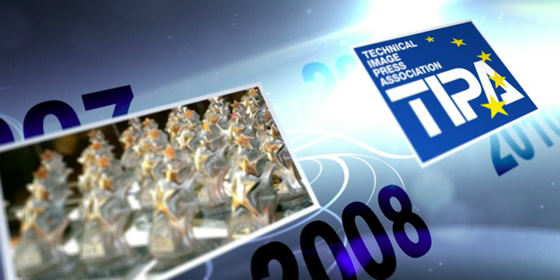 Madrid, 20 September 2010 ﾖ During Photokina ﾑThe Technical Image Press Associationﾒ (TIPA) will be showing videos of the 40 winning products of the 2010 TIPA Awards, which are considered to be the most coveted photo and imaging awards. The videos will be shown on LG Electronics plasma screens ﾖ which won the 2010 TIPA Award for the Best Photo TV Display.

The screens will be showing videos presenting TIPA and the TIPA award winning products at Messe Club, Passageway Halls 3/11, Entrance Piazza. A special information leaflet about the TIPA Awards will also be available.

The XX TIPA Awards 2010 were voted on by the editors of the 28 member photo magazines from nine European countries plus Canada, South Africa and the United States, at the General Assembly held from 8th-10th April 2010 in New York, USA.

All of the 2010 TIPA Award winners are listed on the TIPA website at www.tipa.com with product photos and official jury citations. The website also allows visitors to search all previously awarded products since 1991.