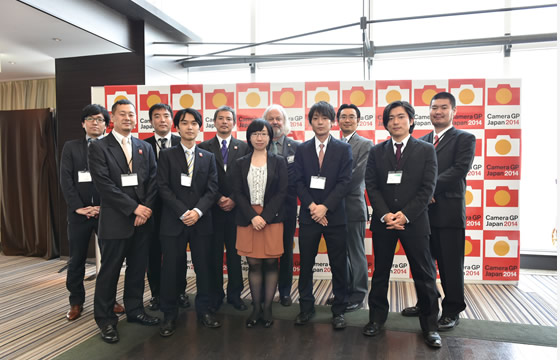 The winners of the Camera Grand Prix 2014, hosted by the Camera Journal Press Club of Japan (CJPC), received their awards in Tokyo on Friday, 30 May. Mr. Johan Elzenga, a member of the board of TIPA, attended the awards ceremony.

The Camera Journal Press Club of Japan was launched in 1963, whose members are the editorial staff of Japan's 10 major camera/photographic journals. The CJPC has a collaborative agreement with TIPA (Technical Image Press Association) whereby they vote on each other’s awards. TIPA membership comprises 29 leading photo and imaging magazines from 16 countries on five continents.

Nikon’s stunning retro-styled Df digital SLR scooped the top award in the premium camera category. The CJPC’s Camera GP executive committee remarked that, in this digital age when priority is given to making cameras more efficient and improving their specifications, the Df is extremely successful at proposing a return to a time when photography took a little longer and users enjoyed manual operation of these precision devices.

“While the longing for the ‘good old days’ and reversion to the past that the Df represents have been criticized, the camera has been well received because it proposes a shooting style that allows users to relax and concentrate on photography for a fresh new sense – one not often experienced in this modern age. What's more, the superior operation and basic performance afforded by the ‘retro’ design, and the camera's support for older Nikkor lenses speak not only to fans of conventional film cameras, but to a new class of users for whom this camera represents a gateway to digital cameras. Intentions behind development of the Df are clear and its contribution to photography is great, characteristics rarely seen with digital cameras released in recent years, making it suitable for selection as Camera of the Year.”

“Differences in rendering resulting from changes in aperture settings or shooting distance exhibited by this single lens are also appealing. It is an ambitious lens that makes mastering it enjoyable by daring to be unique at a time when size and balance are emphasised. This lens clearly reflects the intent and exacting nature of its developers.”