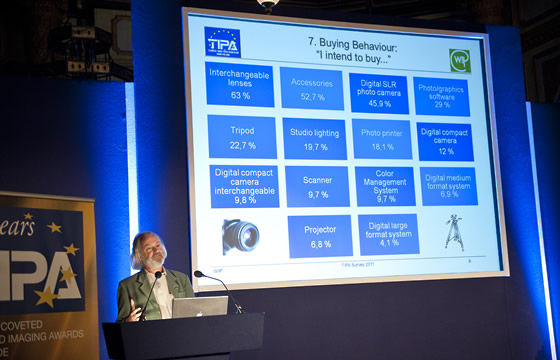 The results of the TIPA Readersﾒ Survey 2011 were presented by TIPA Secretary, Johan Elzenga (see photo) during the XXI TIPA Awards Ceremony, held in London on 30 June.
More than 10.000 readers of 23 TIPA member magazines from 14 countries responded to this latest survey. This is the 4th biennial readership survey prepared and analysed by WIP, a German press research institute. TIPA also ran several internal readers surveys from 1992. As the very first official activity other than the awards, the first survey was analysed by GfK, the famous German market research company, and presented at photokina in 1992 at the TIPA Awards Ceremony, by Giulio Forti, now TIPA Vice-Chairman.

The current survey confirmed that the photographic press plays a very important role in this industry and will continue to do so in the future. While 86.3% of respondents regularly obtain information from the Internet, the photographic magazines still rank first with 93.7%.
Moreover, independent expert editors of photo- and imaging magazines were shown to be trusted the most by consumers. The survey shows that 52,8% trust photography magazines most and that the Internet comes second with 20.7%. TIPA considers that there are serious and trustworthy websites, indeed the member magazinesﾒ websites will have contributed to this result. "My specialist dealer" got only 6.4% appreciation, with multi-topic magazines, retailers and company brochures following at a distance.

The full results of the TIPA Readers' Survey 2011 are available for download.