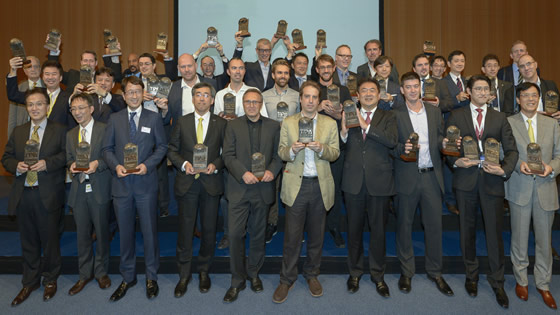 The Technical Image Press Association (TIPA) successfully celebrated the XXIV edition of the TIPA Awards Ceremony on 16 September during Photokina, the world’s leading imaging fair, in Cologne, Germany. Representatives of the winning companies were welcomed by members of the TIPA board. The winning products had been selected by the TIPA members in the annual meeting of TIPA, held on 5 April 2014 in Vancouver, Canada. During the ceremony the bronze trophies, based on the TIPA logo, were presented for the 40 winning products.

At the TIPA annual meeting 28 member magazines and the Camera Journal Press Club (CJPC) of Japan voted for the best product in the 40 categories. They also voted to accept FHOX magazine, from Brazil, as a new member of TIPA. There are now member magazines from nine European countries plus Australia, Brazil, Canada, China, India, South Africa and the USA. The CJPC of Japan and TIPA cooperate to vote for the best products for the TIPA awards and the Japanese Camera Grand Prix.

TIPA was founded in Paris on 16 April 1991 as an association of European photo and imaging magazines. At the annual meeting in 2009, held in Budapest, Hungary, TIPA members voted to transform the association from European into a global organisation. With the world getting smaller, TIPA decided that the time had come to grow and strengthen its image and influence at an international level. With this decision, TIPA opened its membership doors to non-European members.

TIPA is eager to be able to spread its message of enthusiasm and optimism about photography to a worldwide audience.