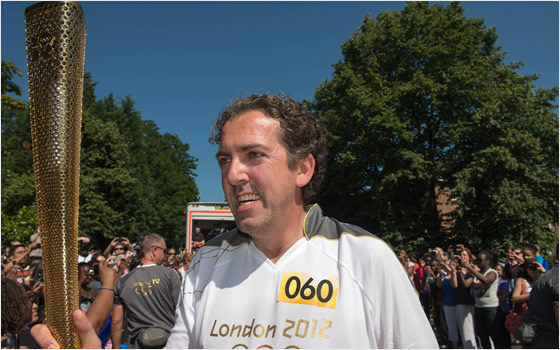 TIPA's Chairman, Thomas Gerwers was one of 8,000 inspirational Torchbearers to carry the Olympic Flame through more than 1,000 cities, towns and villages in the UK.

Thomas Gerwers was invited by Samsung, one of the Worldwide Olympic partners to carry the Olympic Flame on behalf of the international photographic press. Thomas Gerwers carried the Flame 300 metres as it travelled through the London Boroughs of Lewisham, Bromley, Croydon, Sutton, Merton and Wandsworth, marking the 66th day of the 70-day Olympic Torch Relay.

Thomas Gerwers said: "It has been a real honour and a lifetime experience for me to be chosen as a torchbearer for the London 2012 Olympic Games. I am proud to represent the TIPA Association member magazines, as well as the photo and imaging press in general."

The Olympic Flame ends its journey on Friday 27 July, as the last Torchbearer lights the cauldron at the Olympic Games Opening Ceremony, marking the official start of the Games.